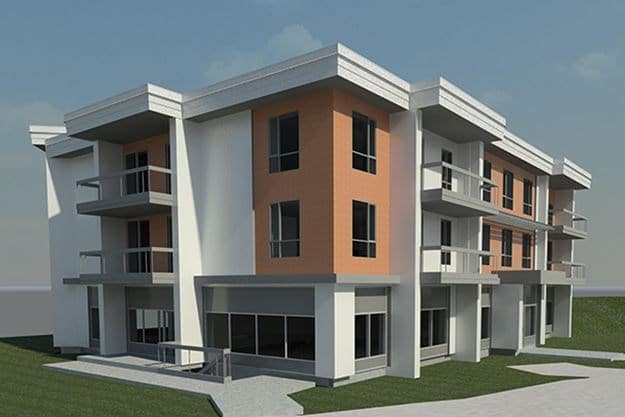 Kiwi Newton Construction and Terra View Homes are set to break ground this year on a new building that is one of 16 projects chosen to be part of the Canada Green Building Council’s Zero Carbon Building Standard pilot program.

The eight-unit residential building with ground-floor commercial space will be part of Terra View’s NiMa Trails development in the north end of the city, near Guelph Lake.

“The NiMa Trails project was a great one for us, because it’s a great case study,” said Mark Hutchinson, the council’s vice-president of green building programs. “The level of energy efficiency they’re aiming for is very, very high.”

The project is one of the only residential projects that was chosen to be part of the pilot program, which is working on a standard designed specifically to guide commercial, institutional and multi-residential building, Hutchinson said.

Like the Net-Zero building standards applied to residential homes, the Zero Carbon Building Standard is interested in energy efficiency, but it goes beyond that, focusing on carbon pollution in other areas.

The standard will take into account things like the life cycle of a building, what the building is made out of, the carbon emissions that result from manufacturing those materials, renewable energy produced on-site, as well as renewable energy procured offsite, said Hutchinson.

Another key difference is that the standard will be able to be applied not just to new construction, but also to existing buildings.

“One thing that we felt was really important was to recognize the importance of the existing building stock we have today,” Hutchinson said.

The council put out an invitation for building owners and design teams to submit projects to be part of the Zero Carbon Building pilot.

The 16 chosen projects represent a range of new and existing buildings all across Canada, including commercial, institutional, residential, warehouse and office buildings. The projects, announced in late May, will help to inform further development of the standard over the coming years.

The Guelph project is a new build that will feature solid precast concrete walls, roof and floors. Among its special features, the building will have triple glazing, photovoltaic solar panels on the roof and parking areas, and thermal solar panels for water heating requirements. It will also have in-floor heating and cooling with geothermal ground loops that take advantage of the site’s natural surroundings, a news release said.

The building will become Terra View’s new flagship head office and display centre with eight condominium units above, two of which will be model suites for a future 62-unit building, it said.

“It seemed an appropriate project to take to the highest environmental and efficiency level possible,” Terra View founder Andrew Lambden said in the release.

The eight-unit condo will be part of the 14.7 hectare NiMa Trails development in the north end, where Terra View plans to build 334 units that will be a mix of single-detached homes, townhouses and apartments, with proposed commercial or office space, parks and open space.

Terra View and Kiwi Newton Construction are currently working with the City of Guelph to begin construction on the building by the end of 2017.

It’s not the first time the two companies have worked together on a project. The two companies embarked on their first project together in 1998, when they transformed a former distillery warehouse into the Seagram Lofts in Waterloo.

The renovation project involved recycling materials from the demolition process into the new construction, and incorporated central heating and domestic hot water sources that can be changed to a zero-carbon energy system without renovating the entire building.

“I grew up on a farm and often lived and worked on another farm with no grid utilities,” Newton said in the release. “This observation of nature and working in nature has helped me to understand the needs of modern buildings and how they must interact and work with nature.”